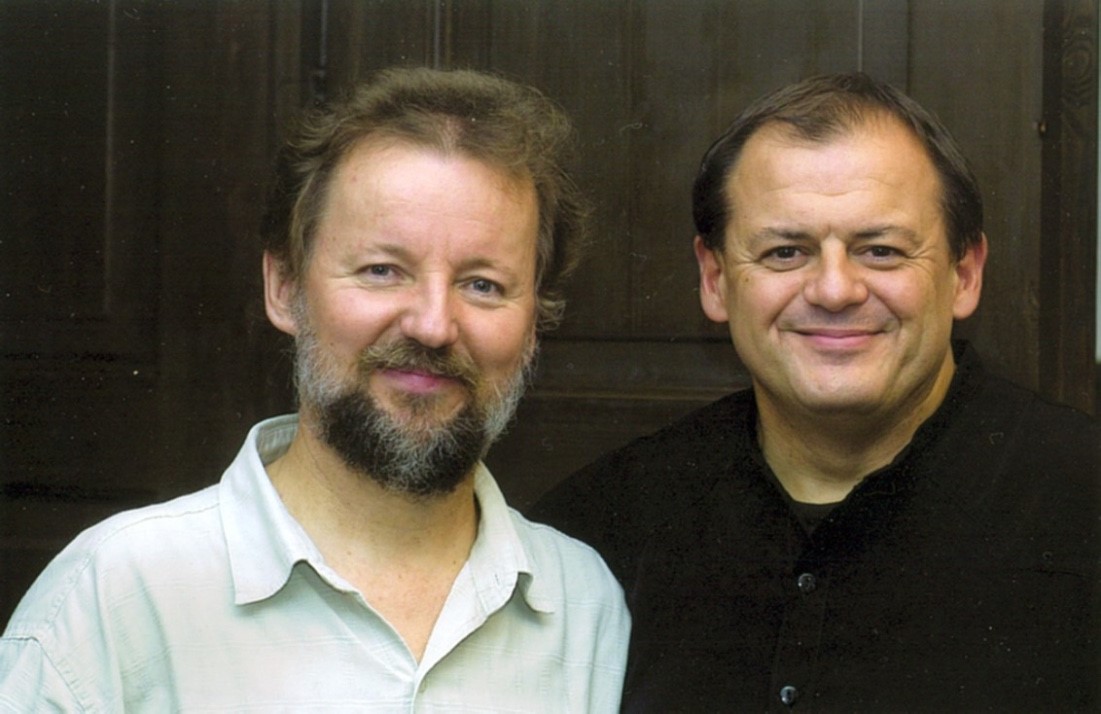 Károly Binder is an appreciated pianist, composer and professor, leader of university department. He applied his talent for new trends, different cultures, various composing techniques and the synthesis of improvising systems, however, he does not forget his own cultural roots. As a versatile musician, Károly Binder has composed 318 chamber and piano pieces, 43 pieces for films, plays and radio theatres. He has released 67 LPs and CDs, mainly his own compositions that are also performed on concerts. His concerts and master courses are held in several parts of the world including well-known towns and venues such as London Royal Festival Hall, Berlin and Bayreuth, Helsinki, Ankara, Cairó, Amsterdam, Brussels, Graz, Paris, Milan, Athens and Oberhausen among others. His artistic career has been rewarded several times including, for example Jazz album of the Year: Binder-Shotham: Dance Music (1991), Erkel Ferenc-Prize (2003), Ludwig Maximillian University /rewarded/  (2011), Gramofon – Hungarian Jazz Prize (2013), Artisjus – Lifetime Achievement Award (2017) More information: www.binderkaroly.com

Mihály Borbély the famous Hungarian multireedist got his degrees in classical clarinet and jazz saxophone from the Béla Bartók Conservatory and Ferenc Liszt Academy of Music. Similarly to Károly Binder, he is also a real versatile musician working in different musical styles from folk and world music to jazz and contemporary music. In addition to his original instruments Mihály Borbély plays folk instruments such as the tárogató, folk flutes, kaval, dvojnice, fujara, ocarina, bombarde and zurna as well. Beside his career as a member of the famous folk group the Vujicsics (founded in 1974) he has participated in severeral recording sessions and concerts of leading Hungarian and international artists and groups, Paul Bley, Steve Coleman, Trilok Gurtu, Charles Lloyd, Herbie Mann and Saxophone Summit (Michael Brecker – David Liebman – Joe Lovano) are included among others. In addition, he also performed with composer-conductor Peter Eötvös and the National Philharmonic Orchestra as well as in his own jazz groups, the Quartet B, the Mihály Borbély Quartet (’Borbély Műhely’) and a duo project with pianist Károly Binder. More information: www.mihalyborbely.hu

Regulations of participation
In accordance with relevant rules only persons with immunity card can take part in programs held in closed areas; people under 18 can visit the programs with the accompaniment of immune adults. It is not obligatory to wear a mask.

Registration
The program is free of charge, however, registration is needed in advance.
You can apply to the library for participation on koncertregisztracio@fszek.hu email address or on phone, dialling the following phone number:  +36 (1)  411-5011.  You can give the number of participants. You will be notified in email as a feedback giving seats’ numbers, seat reservation does not occur  by the order of arrival. Please notify us in email if you cannot visit the concert. 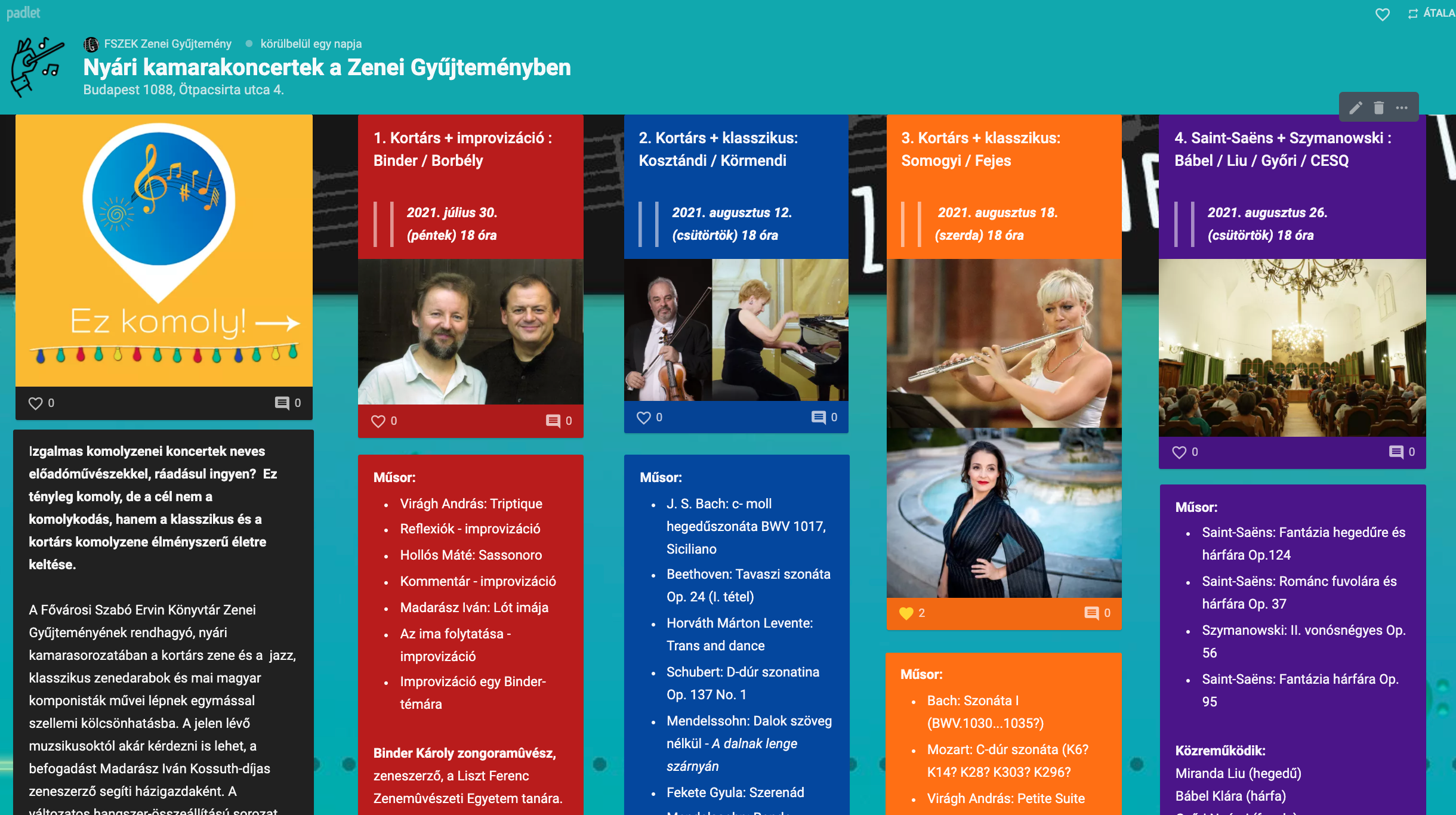 It's serious!
The concert is the first program of our extraordinary summer chamber concert series. You can receive information about the detailed program of the series including related videos, quizzes and book reviews on our Padlet-site.

Library in the palace
Before the concerts, you can take part in a guided tour in the library complex awarded with Europa Nostra Award and Architect Awards of Excellence. As one of the most beautiful buildings of the so called palace quarter or “magnate quarter” of Pest, Wenckheim Palace has housed the Central Library of Metropolitan Ervin Szabó Library since 1931 (90 years). The listed building planned (and built) by Arthur Meinig was reconstructed at the turn of the millennium. Modern wings are also connected to the masterpiece of Hungarian Neo-Baroque architecture; it is a nice and unique sample of the harmony of the old and new; it is popular with both the visitors who like historic atmosphere and those who are interested in modern environment and up-to-date services. You can send a registration mail to koncertregisztracio@fszek.hu if you want to visit the library complex by a guided tour.

The program series is supported by National Cultural Fund.
By visiting the program the participants acknowledge that photos/videos are taken on the programs; they can be published on the library website or Facebook site. Data management is based on voluntary consent. You can object to publication of your profile in writing.